i want to look at life in the available light

Dr. James Gibson’s revolutionary ecological theory of perceiving and acting has been around for over 40 years. A key element in his theory is the concept of affordances. Yet even after all the time and years that psychologists have written about affordances, the concept still doesn’t seem well understood. Why? 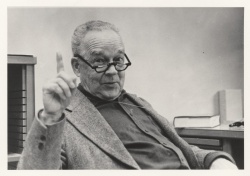 Gibson’s ecological theory turned much of cognitive psychology upside down when his 1979 book, The Ecological Approach to Visual Perception, was published. An entire chapter was devoted to defining and describing the concept of affordances. The concept has since spread beyond psychology, yet many in the areas of experimental and cognitive psychology don’t seem to understand affordances.

Here’s his definition from the beginning of that chapter (all italics in the original):

The affordances of the environment are what it offers the animal, what it provides or furnishes, either for good or ill.

Another way of stating it is: Affordances are perceivable opportunities for action in an environment that are specific to an organism.

Gibson pointed out that the verb “afford” is in the dictionary, but until he coined the word “affordance”, there was no corresponding noun form. Affordance is not recognized by Dictionary.com; it does list “affordability” as a noun, which means something quite different from Gibson’s neologism. Even so, it’s pretty clear linguistically what “affordance” means.

What I think makes it conceptually challenging for some psychologists is the level of focus: affordances imply something about both the perceiver and the environment. That means that to pick up an affordance, the perceiver must have a perceptual system that is capable of perceiving it. Also, affordances must be assessed relative to the perceiving animal. Some physical properties of an environment are perceivable and therefore useful to some animals, but not to others. Organisms can grow into—and possibly out of, as they age—some affordance properties.

Here’s an example. Human eyes unaided by technology can’t perceive infrared and ultraviolet light. Many insects and birds can. What each animal sees when looking at a flower will be different, depending on what their eyes can perceive. Here’s what people who aren’t colorblind see when looking at cinquefoil flowers [both photos copyright Bjørn Rørslett]: 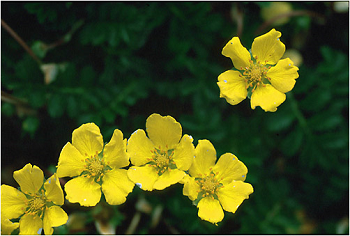 Here’s an approximation of what animals that can see ultraviolet light perceive from the same flowers: 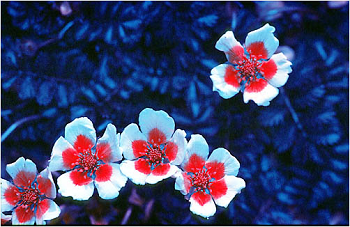 Birds and insects often play a vital role in pollination. Knowing this, the visible ring of color in ultraviolet that’s focused on where the pollen and nectar are makes sense. It’s information that signals “here’s where the goodies are”.

So to understand an affordance, we have to focus on both the perceived, which is some aspect(s) of the environment, and the perceiver. This is a radically different approach to understanding perceiving than more traditional experimental and cognitive theories. Many of them focus on mental images—representations in an organism’s head, which are “processed”, “manipulated”, etc. to yield meaning for the animal.

Gibson rejected all that. His approach is naturalistic and holistic. What we perceive as we move around in and interact with our environment are opportunities to do things: walk, sit, eat, drink, use tools. We also perceive capabilities of or in the environment. Affordance words specify these opportunities. And many (if not most) of them are words we use in everyday communication: walkable; sittable; edible; potable; knittable; comfortable; legible; openable; reasonable; etc. The –able or –ible suffixes simply mean “capable of” or “able to”. So really, in coining the word “affordance”, Gibson just labeled a class of words we’ve been using for a very long time.

There really isn’t anything challenging about the definition of affordances. So why don’t more psychologists seem to understand the concept?

I think it mostly comes down to two things:

The difference in perspective between mainstream cognitive theories and Gibson’s ecological theory can be easily expressed by comparing the questions they study:

If psychology is the science of human functioning, shouldn’t its questions focus on how we function in our everyday lives, rather than what researchers can conveniently manipulate and measure in our laboratories? How can we come to understand an organism’s functioning if we don’t consider its natural environment?

Psychology Has a Bigger Problem Than the Replication Crisis

Thoughts on Gun Violence From a Psychologist’s Perspective

Why I Became a Massage Therapist